I miss a dear friend who was also a teacher

Swapan Dasgupta who had known Jaitley since 1972, when they were part of the debating circle of Delhi University colleges – says Arun Jaitley was more than a friend to him. Quoting Swapan Dasgupta – “He was my political mentor, a sounding board & a man could laugh with & see the funny side of politics…..”

Today marks 3 years since he left us but Arun Jaitley lives on in the hearts and minds of all those who came in contact with him. We miss you Arun. pic.twitter.com/AXoCUxRsiy

Politics excited and enthused Arun Jaitley the most. The Delhi University graduate, Arun Jaitley started his political career very early in his life as a student leader of ABVP. Protesting against the Emergency imposed by the Indira Gandhi government, the young Arun Jaitley was also put under preventive detention for 19 months.

Despite being an active politician since 1980, he had never contested direct elections till 2014, when he unsuccessfully contested from Amritsar loosing to Captain Amarinder Singh. Quoting from a memoir by Abhishek Singhvi: “His heart was always in politics. Law was only something he did as a profession, for his upkeep, for pursuing causes, public or private, for the camaraderie, for the width of opportunities it provided and, above all, for its inherent connect with public life”.

The sharp-tongued and temperamental Arun Jaitley, the man for all seasons had the mastery of the political system and a deep understanding of complex legal and constitutional issues. It was considered that the astute strategist played a key role in bringing Narendra Modi at the national scene and was Modi’s go-to advisor.

From handling Modi’s legal cases of the 2002 Gujarat riots to working on his political strategy in state polls to recommending him for the PM candidate, Jaitley played a key role. Quoting Swapan Dasgupta from his Aug 2020 article – “Narendra Modi’s complete depen­dence on Arun’s negotiated approach to many complex and seemingly intractable political issues created an erroneous impression of him being essentially a backroom manipulator, an impression fostered by those who equated politics with grandstanding“.

As the finance minister in the Modi government, he brought several key economic initiatives like Goods and Services Tax (GST), merger of the railway budget with the general Budget, introduction of the Insolvency and Bankruptcy Code and of-course the controversial demonetisation.

Jaitley has influenced many lives with his charismatic personality and curious mind and an uncanny ability to connect with people from across parties and background.

Arun was the consummate Delhi insider 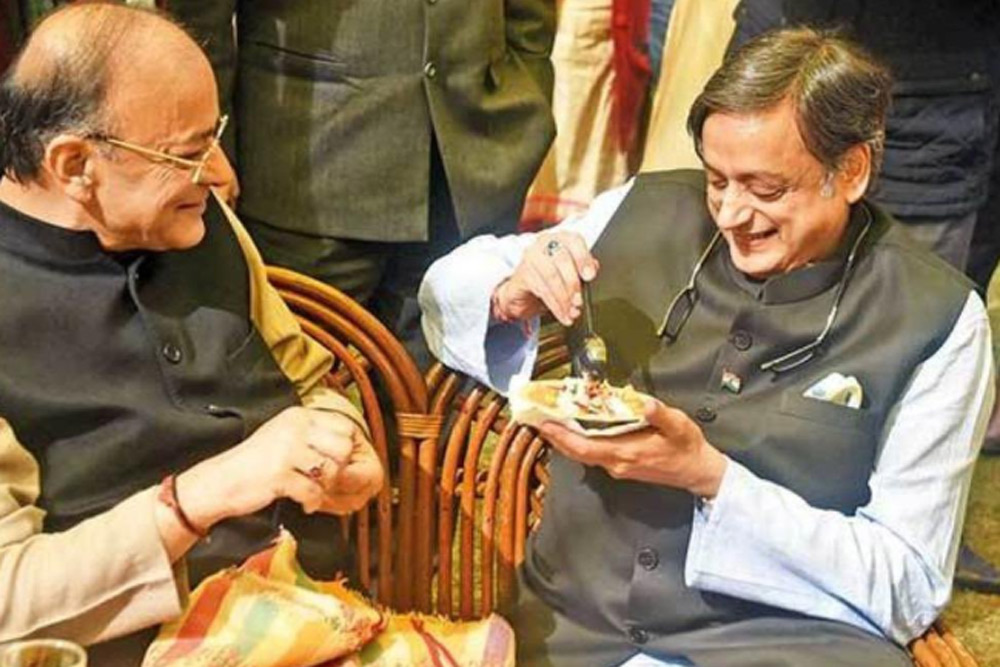 Shashi Tharoor, Congress Lok Sabha MP from Thiruvananthapuram, had first met Arun Jaitley in 1974, when they were both students at Delhi University— Arun Jaitley was the president of the Delhi University Students’ Union (DUSU), and Shashi Tharoor was the president of the St Stephen’s College Students’ Union Society. Penning a memoir for Arun Jaitley in 2019, he wrote : Arun was the consummate Delhi insider, a sought-after guest at every Delhi soiree and perfectly at home in all sorts of company. He was a bon vivant, clever and witty in conversation, with a twinkling-eyed taste for gossip and an intimate knowledge of the foibles and peccadilloes of every notable denizen of Lutyens’s Delhi, which he enjoyed recounting with relish.

Considered to have the perfect blend of the sharp legal brain and humility Jaitley was an institution in himself and earned not only respect but more. Quoting from a (24th August, 2019) memoir by Paroma Roy Chowdhury – SVP and Head – Corporate Communications at BYJU’s : I never knew Arun Jaitley personally. But I did meet him a couple of times in the course of work. What always struck me was how courteous and gentlemanly he was. Once I had escorted SoftBank Chairman Masayoshi Son to the top table at a government function, where Mr. Jaitley was already seated as the Chief Guest. There was only one vacant chair meant for Masa. Mr. Jaitley immediately stood up and gestured towards me to take his chair. Highly …embarrassed, I refused , only to hear, ” Well, I can’t leave a lady standing, while I sit. I would always remember him as a gentleman, who stood up for an ordinary woman, when he absolutely didn’t have to.

To his last day Jaitley counted Sharma – now a media star – as one of his closest Friend and Sharma considered him as a guardian and guide.

Quoting from a memoir of Shweta Punj, a senior journalist: From the young to the old, from journalists to cricketers, from Bollywood actors to politicos– everyone has a story to share about Arun Jaitley. He was among the few of his generation of leaders who was loved and revered in equal measure. I learnt how individuals can become so much larger than life by their sheer ability to connect with people across all walks of life.

Relationships can be built and nurtured across ideological, political or any other barrier–you can be friends even if you disagree with each other. Foresight and vision are built through life experiences and no one is too big or small to learn from.

The passage of the controversial GST was just one of the examples where many got a glimpse of Arun Jaitley as the master strategist and reconciler silently worked behind the scenes to build a political consensus. From meeting leaders of the key regional parties to business chambers, to Opposition parties to build consensus and ensure full acceptance by all the parties involved, it was Arun Jaitley all the way. There is a reason why in 34 meetings of the GST Council, it was said there was never been a vote, which by any measure is a tough standard to breach and the consensus-building talents to ensure full acceptance by all the parties involved negotiating power of Jaitley played a critical role.