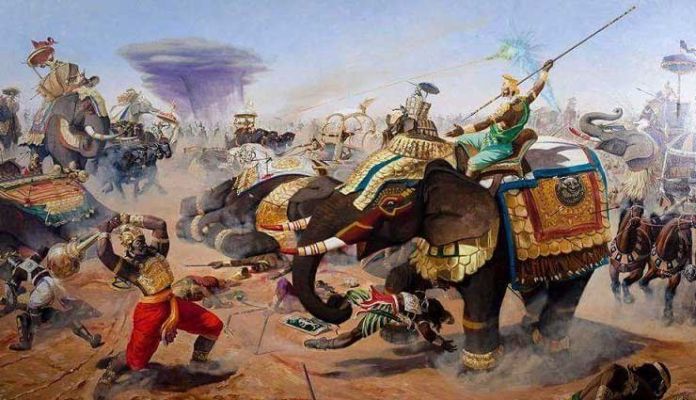 As the world fights the coronavirus Pandemic, there is the other ongoing virus of fake-news.

Incidentally one of the first recorded “fake news” goes back to days of Mahabharata: Ashwatthama, son of Drona, is an important character in Mahabharata, the great Indian epic. He is one of the seven Chiranjivi (immortal living being) in Hindu mythology. The Kurukshetra War took a different course because of Ashwatthama. The moment Pandavas learnt that they would not be able to defeat the Kauravas as long as Drona was the commander of the rivals, they devised a strategy to remove him the battlefield. As per the advice of Lord Krishna, Bhim killed an elephant by name Ashwatthama while Yudhishtira shouted from the battlefield that Ashwatthama is dead. A heart-broken Drona put down his weapons and left the battlefield. This facilitated the victory of the Pandavas.

Unfortunately 1000 years later the story has not changed ..for generations, misinformation and fake news continue to be used to control and manipulate public perceptions. And it’s the politicians across the world who are one of the key culprits using “fake news” into a weapon to their advantage.

While the Covid-19 cases are spreading fast and doubling in 14-18 days the fake news is travelling much faster. The social media is filled with various fake theories, remedies, doctored videos, unrelated misinformation, wild rumours, conspiracy theories, doctored videos not only about the Covid-19 virus and governments. An infodemic is defined as an overabundance of information that makes it difficult for people to identify truthful and trustworthy sources from false or misleading ones.  India is not an exception to the virus of fake news as this is a global phenomenon.

The crisis of fake news is much more severe in India largely because of the country’s rapidly growing social media base and unregulated social media laws. The COVID-19 pandemic is changing the way we consume media. According to a report released by Broadcast Audience Research Council (BARC) India and Nielsen on the impact of COVID-19 on television and digital media behaviour across India, users are spending 1.4 hours a day more on their smartphone devices with the biggest jump coming from users in the 35-44-year age group. Due to the level of uncertainty around what is happening, people have also increased their time spent on chatting (+23%) and social networking (+25%) apps. Almost all social networking apps – Whatsapp, Facebook, Instagram and TikTok – have seen significant increases.  Anyone with access to the internet can contribute to the war on misinformation; Social media users are spending more time online than ever before.

With half a billion active users, Indian internet is more rural, local, mobile-first than ever. In one of the new study by Pew Institute nearly 60% of the people regularly use social media for news. The power of media has always been there to help build perception but today (digital) media is not only acting as a media but is defining the message.  It is expected that in the upcoming elections Covid19 will be a big issue and the election narratives will revolve around the same playing on digital media.

The social media and modern technology are being used by major political players and in the post-COVID era, the political campaigns will largely go virtual and online. In the past there were many instances of all political parties in the country engaging in peddling fake news and with COVID-19 pandemic, accelerating the digital adoption across India things will change more. Apart from videos, old and unrelated images may be shared on the platform with falsified claims on a daily basis to build or change perception.

The Internet base in the country has more than doubled to almost half a billion users and as per a report by the Internet and Mobile Association of India (IAMAI) and Nielsen, India now has 504 million active internet users, who are five years or above. Today the over the digital world has the potential to reach more than half the population directly and act like a force-multiplier.

The upcoming elections are going to again use the power of shared media for spreading their messages. With more that  400 million Whatsapp users in India political parties have mastered the art of using this platform. The central teams send content and strategy to WhatsApp groups with state social media heads, who then pass it along to groups with constituency-level coordinators or conveners. The message thus travels on till it reaches the districts and then, the booths who then pass it to the public at large.

Academicians Harvard’s Claire Wardle argue that to address the broader problem of information disorders on the web, we all should shun the term “fake news”.