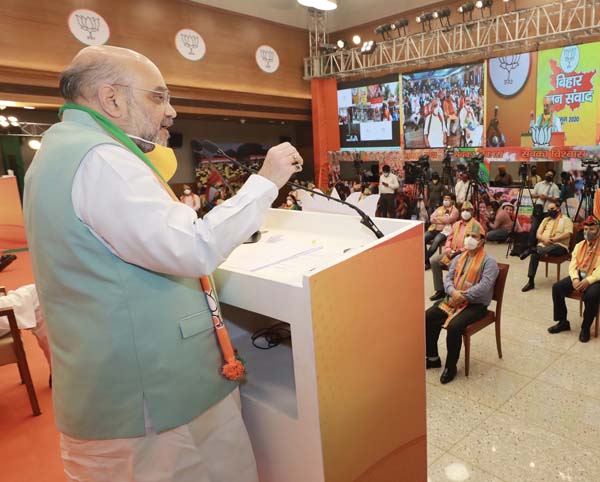 “THIS IS NOT AN ELECTION RALLY. THIS IS A VIRTUAL RALLY TO BOOST THE MORALE OF THE PUBLIC AGAINST THE COVID-19 PANDEMIC” : Amit Shah, senior BJP leader at the Bihar Jansamvad (virtual) rally.

An election in the backdrop of pandemic will be historic for India defining the characteristics of a democracy to hold periodic elections. In the last few months, countries like South Korea, Mali and the US (Wisconsin) have held elections, braving the Covid-19 pandemic. The Election Commission of India has also started preparing for the various state elections scheduled in 2020 and 2021.

With the restrictions of social distancing due to Covid-19, it will be interesting to observe the campaign management of various political parties. As expected, large (physical) rallies which symbolised the popularity of a leader and the political party will be replaced by the virtual attendance, something similar to the likes and shares received on social media. The game will shift to the virtual world.

The first in the list is the Bihar elections, scheduled in October-November and the major political parties have started the campaigning. Bhartiya Janta Party (BJP) holding its first virtual rally titled Bihar Jansamvad from the national capital through various online broadcast media, has already set the tone for a new era of campaigning.

India had its first taste of ‘social media election‘ in 2014 but much has changed since then. The Internet base in the country has more than doubled to almost half a billion users and as per a report by the Internet and Mobile Association of India (IAMAI) and Nielsen, India now has 504 million active internet users, who are five years or above. Today the political messaging over the digital world has the potential to reach more than half the population directly and act like a force-multiplier in political messaging.

There has also been a big change in public interest as voters are no more concerned only about the candidate but are asking about policy initiatives at all levels. With high awareness level, national issues are becoming part of the core narratives even at local level and for all upcoming elections, Covid-19 issue will be the key focus for all messaging.

The governments at the center and local level is now creating more authentic, engaging, high-quality, and real-time content in multiple languages catering to the growing digital population.

While the new media platform technologies are helping reconnect with publics, political parties are using integrated communication platforms to create more touch points. It is expected that the LED screens and Mobile phones will be the canvas for messages what once was through pamphlets and wall paintings.

From once in five year showing face, to now the 24×7 image watch mode, today politicians are literally in the palm of their voters and they are having to change the way they run things to stay in the perception. From what you are wearing to what you eating to whom you are meeting to what you are saying to whom, everything is under a lens eye and available on social media.

With real-time insights and instant feedback the political parties/personalities are investing time in planning a reputation framework, doing extensive research, identifying stakeholders and then reaching out to them regularly, keeping their long-term view in mind. Over the last few years electioneering has taken a new scale now with news room specialist, data analysts, researchers, digital marketers, software engineers, campaign managers and writers taking over the war room from the karyakartas.

The power of media has always been there to help build perception but today the digital platforms are not only acting like a media but are defining the message. Now there is a constant engagement and conversation with previously unreachable politicians and the citizens. Incidentally two of India’s fastest-growing internet states in 2019 were Bihar and Jharkhand which witnessed 36 percent and 48 percent increase in internet population respectively. Now with Bihar going for elections in year end the political parties will have a new e-playbook.